Primal Adventures recently took a group of 10 people to participate in the Annapurna Trail Marathon in Nepal. Now this is not your regular road marathon, but a trail run with an altitude change of 3800m over 42kms. It was also the final of the Salomon Golden Trail World Series, so it’s certainly not for the fainthearted and peppered with the fastest trail runners in the world. We went there to raise funds for Running for Premature Babies, and had an incredible adventure as well as raising over $50000 for lifesaving neonatal ICU equipment.

Here are 5 interesting things about the event, and reasons why it’s great to take on a massive challenge every now and then.

1. The Himalayas are enormous! 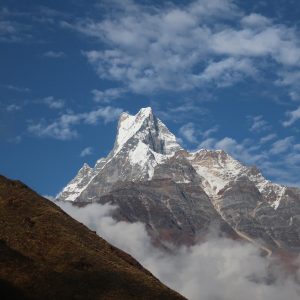 It is so beautiful that all you want to do is stop and take photos the entire time, or just stand there in awe.

These mountains are on a totally different scale to anywhere else in the world. The Annapurna Massif has 13 peaks over 7000m, and 16 more over 6000m. Machhapuchhre at 6993m, sacred mountain of Shiva stood guard during the race, beckoning the runners upward.

The panorama is so spectacular it nearly brings you to tears, as do the ‘hills’.

2. There are actual world champions here 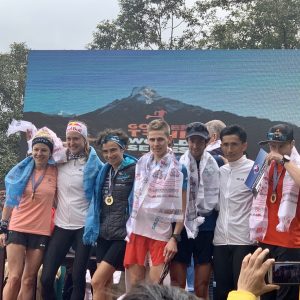 This was no regular fun run, but one filled with the fastest trail runners in the world. These people are much younger than our team of very fit, albeit regular people. We were not a team of seasoned trail runners, but a group having a crack.

Meeting these world champions, and other competitors who were also riddled with self doubt was humbling. It reminded us that it’s all about putting one foot in front of the other. And not giving up.

3. It takes a tough nut just to get to the start line

Things operate at a different pace in Nepal. A regular fun run or organised event in Australia would be scheduled and planned within an inch of it’s life. Not so in Nepal! The start time was announced the day before the event, and didn’t begin till 8am.

Even the jeep ride to the start was enough to make the toughest stomach churn! The rocky potholed roads required local skill and knowledge to ensure you arrived in time.

But the main thing was committing to the goal of participating in the event and never giving up, despite the ups and downs.

4. Doing it for a cause makes it so worthwhile 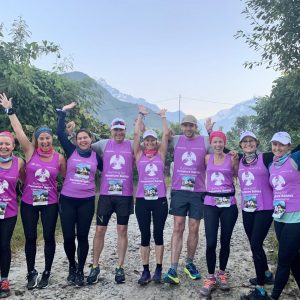 Our group participated in the Annapurna Marathon as a way of raising money for Sydney-based charity Running for Premature Babies. Each person had to commit to raising a minimum of $2500 to join the team. Some team members had been through their own experiences of having a baby born prematurely, so it was an extremely personal journey that was shared between the group. The inspirational CEO and founder of the charity Sophie Smith was part of the team, and provided the leadership to remind us that each persons fundraising efforts were incredibly useful.

Our incredible group had raised over $50000 through the generosity of many to provide lifesaving equipment for future babies born prematurely. This definitely spurred the team on during the event.

5. It’s about the journey not the destination 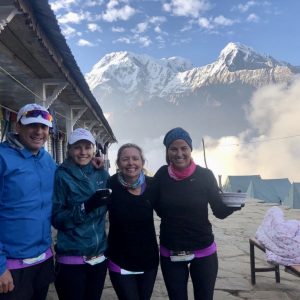 As the day drew to a close, none of our team had made it to the finish line. The clouds had moved in in the afternoon; one group member had gotten lost, another had injured an ankle, another had turned back at checkpoint 3.  They were asked to stay at checkpoints overnight by race officials as it was getting too dangerous to continue. The cold night air set in, and steep cliff edges that were not visible in the dark were all around. Morale was pretty low.

The group stayed in teahouses on the mountain, and woke up to an incredible dawn with the mountains revealing themselves in their full glory. Together and individually they made their way to the finish line, crossing it with tears in their eyes and sighs of absolute relief. They’d done it, and couldn’t have been more proud.

Some of the highlights